DOZENS of Brits arriving at Alicante-Elche airport yesterday were refused entry to Spain and sent back to Manchester on the SAME PLANE. 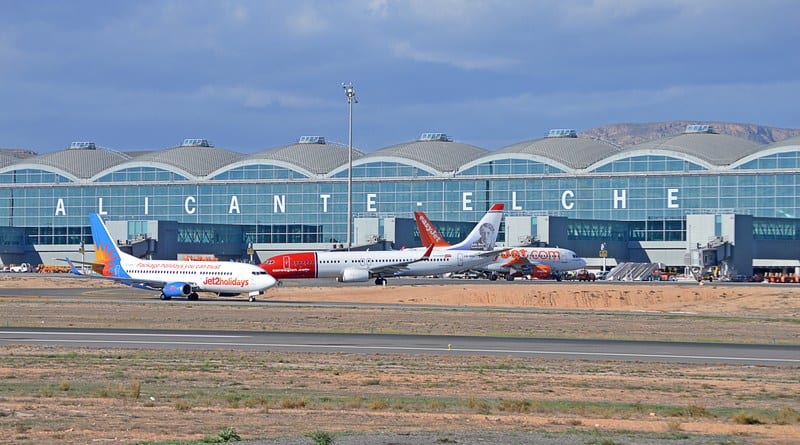 Border guards had erected a sign in the terminal stating, ‘NO TIE CARD, NO ENTRY’, to the amazement of travellers arriving yesterday, March 29.

Some 40 people that had arrived from Manchester Airport were left upset, angry and confused – considering Ryanair airport staff had APPROVED exit from the country.

Stuart Miller, a 47-year-old offshore-worker from Manchester, described the situation as ‘absolutely diabolical’.

exclusively: “People with letters from Alicante Foreigners Office asking them to collect their residency cards were turned away … what more proof do you need of residency?”

Some of the others sent back included a woman wanting to see her sick father, stranded and alone in hospital.

What added to the ‘fury’, according to Miller, was the fact that armed police were there in support of the customs agents.

Adding to the confusion, anger and despair – those refused entry had to get on board the plane from which they had just alighted, along with scores of others that were scheduled to leave Alicante for Manchester.

As the 40 plus travellers reboarded, the flight was subsequently delayed, adding further to tension in the cabin.

To rub salt in the wound, they were informed that their hold luggage wouldn’t be sent back to Manchester until Good Friday, April 2.

Miller admitted: “There was no advice, no help and – to be fair – no good reason for us being turned back at Alicante.”

Miller admitted: “There was no advice, no help and – to be fair – no good reason for us being turned back at Alicante.”

Under the current travel ban on travellers from the UK that will be lifted from March 31, Spain only allows those who can prove residency in Spain to be allowed to travel from Britain.

Early confusion when the ban came in on December 23rd saw people being turned away for having the correct paperwork to prove residency which includes the new TIE residency card as well as the older green paper certificates issued prior to Brexit but it has remained unclear on whether other documentation such as letters confirming successful application for residency would be accepted.

A spokesman at the British Embassy in Madrid said they had been made aware that travellers had faced issues at Alicante airport:

“When making plans to travel from the UK to Spain, a UK National must make sure that they meet both the requirements to leave the UK and those to enter Spain, bearing in mind that they are not the same,” the spokesman said,

“Until 18:00 on 30 March (ie today) only those who are legally resident (or have sufficient documentation to prove residency) are allowed to enter Spain,” they said.

“From tomorrow, March 31, entry to Spain will only be granted to those passengers who can demonstrate that their journey is essential, as well as to those who are already legally resident in Spain.”

The spokesman concluded: “Ultimately, the decision on whether to grant entry into Spain is made by Spanish border officials.”